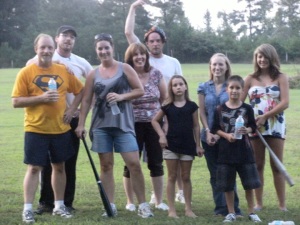 May 14th is the 8 year anniversary of the accident that caused my traumatic brain injury.  We survivors are considered the victims of tbi but we are not the only ones who suffer.  The other victims are almost always the people closest to us.  My wife or as I now consider her “My Angel”, Bonnie was naturally the most affected by my injury.  She had to reinvent her life long before I was even aware that mine needed to be reinvented.

We had been married for almost 33 years.  We both had jobs that were challenging and fulfilling.  The children were all doing well and living independently.  We lived in a home we both loved.  According to all of the American Dream criteria, we had made it.  I was there for her.  I worked every day like a man is supposed to and I was home every night and did whatever projects needed done.  I reached things she couldn’t, opened things that wouldn’t and did the things women shouldn’t have to do.

Well, May 14th 2008 all that changed in the blink of an eye.  When the truck pulled out in front of me, I became “Husband number two.” Gone was the strong independent thinker, the self starter, the multi-tasker and the master problem solver.  What was left was a babbling idiot who gave his boss the finger when he came to the hospital to see me.

Bonnie has always been the perfect example of the devoted wife and mother who takes care of everyone else before thinking of herself.  Just as it looked like we had time and opportunity to focus on us, the accident happened.  I went from being one of the few things she didn’t have to worry about to the thing that now required her constant attention.  The fact that I survived is nothing short of a miracle but that miracle became her nightmare.

Our oldest son, Mike, had his own adventure because of my injury.  It started while I was still in the hospital when his boss refused to give him time off to visit.  Mike, being Mike, told the boss he was heartless and walked out never to go back.         The first few days when it was still touch and go, Mike told Bonnie he didn’t care if he had to sit and feed his dad mashed potatoes, he just wanted him to survive.   Mike says he was immediately ready to step up and be the “man of the family”.  He was very glad though when I was making progress early in rehab because he already knew he wasn’t ready to be walking around in those shoes.  After I came home from the hospital, he moved into our guest house and started doing everything he could to help Bonnie around the place.  Another issue for Mike was that his coping mechanism at that time was drinking which intensified after the injury.

Bryan our youngest, was in the Navy and stationed in Okinawa, Japan so his experience was different.  Since the injury was not considered “life threatening”, the navy would not reassign him stateside.  He was away for most of my recovery and came home to the new me.  He had been gone nearly two years before the injury and didn’t get discharged until almost two after the injury; he didn’t experience the sudden change or the slow recovery process.  He just knows the accident took a piece of me away from everyone in the family.  He had been under some stress already in the Navy and had begun to apply the sailor solution which comes from a bottle.  This of course got worse after my injury.

Our daughter Amy is the most emotional one of the family and when I asked her to tell me about the impact of my injury on her; I got a lot more information than I got from the boys.  Even eight years later, it is all still very raw and real to her.  Here is what she had to say:

“I dialed the number that I found on the accident report. I was nervous and angry and I needed to be heard. He wasn’t home when I called. His mother answered the phone. He was out getting his tux for prom. His tux??? For prom??? How can he even think about prom???

That was one of the times I completely lost it. It was months after dads accident…but that was the night I officially let everything out. A complete stranger, that’s who I shared my most private thoughts with.  I remember crying uncontrollably saying that her son took my dad from me. I told her that her son had taken my children’s Papaw from them. That because of her son my kids would never know the man I knew. I don’t remember what she said but I remember thinking that she handled me and my meltdown fairly well. (I’ve let that anger go and forgiven since that night).

That wasn’t my only meltdown… There have been plenty. The first was the first night in the hospital. They had gotten daddy to a point in the trauma unit that he was ready to be moved to ICU. He was still unconscious and if you didn’t know him like me you wouldn’t have been able to recognize his face. Mom had stepped out to make a call and I sat there holding daddy’s hand. I had taken on the role of “the strong/together one” since the call came that he had been in an accident. But we were alone and as daddy’s girl I was hell bent on getting my way. I leaned over and put my head on his chest. The tears came and I couldn’t stop them. I remember clinching that awful hospital gown and screaming at him to wake up. I was pushing his chest and I remember how my tears just faded into the thin, faded fabric of his hospital gown just as quickly as they fell. This man who had been my hero my whole life wouldn’t even open his eyes or squeeze my hand. I screamed at him…I screamed that he wasn’t done yet, that he was being selfish, that I needed him and that it was time to wake up. I screamed that he had to be ok. I screamed that I wasn’t going to let him give up. And then I just fell over onto his chest and held him. I was drained.

This whole journey has been like nothing you could ever be prepared for. Your whole life is spent a certain way. You know people as they always were, you have expectations, you have memories and you have plans. And then…you just don’t. It’s the most terrifying and frustrating feeling in the world. For the first year after daddy’s accident it was so hard. Have you ever had that “homesick” feeling? Where your stomach just seems to drop and you get scared and everything feels so unsure and strange. I lived with that feeling everyday for over a year. I was trying to be a lot of things to a lot of people and it’s one of those situations where you just don’t get that sense of accomplishment. I needed to be strong for my mom, I needed to help her any way I could. I was trying to be there for my dad but that man wasn’t my dad. It took time, therapy, treatments, doctors, hospitals, and never ending love. Some days I wanted to slap him, some days I wanted to cry with him and some days I think we all just felt defeated. But through every bad day I always felt grateful beyond words that my dad was still here. He survived. And I did too. It took a long time for me to accept that he isn’t the same as before the accident…a really long time. But different isn’t always bad…just different. Guess that’s just life when your dad ends up “eating a truck” for breakfast.

If there is a down side to being dependable, it is that you are, well, dependable and an injury like tbi shows this by how quickly things change.  One minute you are there for everyone and the next, you aren’t there for anyone including yourself.  Tbi creates a situation overnight that would take most people years to plan for.  My family met this monster head on and didn’t give up or run and hide.  I am very proud of each of them for giving their all.  I tried my best to get better as I became aware of my injury and the deficits it created.

This many years out, we are all in the moving on process.  Bonnie and I have moved back to West Virginia to be close to her family and help as her parents get older.  We are remodeling a house there.  In a way, the injury made that possible since I am not working anymore.  Mike has moved on to a new job building cars and is now an avid mountain biker.  He has finally given up drinking and smoking.  Amy and her family have moved to another city where she manages an auto repair and tire shop.  Imagine my “little girl” slinging tires and turning wrenches.  Bryan is out of the Navy, married and they are doing their own home renovation.  He is also a worship leader and musician/singer at his church.

I am so blessed to have a wonderful family to support and be there for my recovery.  I love them all and am extremely proud of them all.  I thank God every day for placing me in the company of these wonderful people.  They say you can’t pick your family but this is the one I would pick if I were given the choice.

4 Responses to The other victims