The Other Side of Recovery

Rehab is a very challenging process and doubly so for someone with a brain injury.  Not only do you have to do cognitive therapy to stimulate the brain but physical therapy PT is almost always a necessary part of rehab.  It was in my case due to other injuries and post-traumatic vertigo, PT was a large part of my rehab.  Some of the things they have you do in PT don’t seem to make sense especially to a person with a brain injury.

During the family day visit at Shepherd Pathways, we walked into the PT room and the therapist, Beth Ditrich, simply said “Let’s get started.”   I sat down on the side of the therapy table and immediately fell full force onto my right side.  My daughter, Amy looked at me with eyes wide open and said “What the hell are you doing?”  The move was part of the vestibular therapy designed to help my inner ear issues that resulted from my head hitting a truck windshield at approximately 50 miles per hour.  This therapy was very effective and along with other things like keeping a balloon in the air while walking around the room helped me get back to walking a straight line and eventually playing basketball again.  It was strange but extremely beneficial therapy.

Speech therapy was by far the most grueling part of my rehab.  It felt like I was back in high school English class.  I didn’t like it the first time and at times, I liked this even less.  I was determined to get better so I tried my best to apply myself.  That was not like high school.  As I mentioned in my earlier post about the role of music in my recovery, my speech pathologist, Karen Patterson, introduced me to the listening program.  This used classical music as therapy.  That’s not exactly what a guy who grew up on 70’s rock wants to listen to.  I saw immediately that my thinking was clearer and I was calmer.  Once again, therapy was very effective though unconventional.  Doing papers and other exercises in speech therapy gave me confidence that I could communicate using the written word which eventually led to a few published articles and starting this blog.

By far, my favorite part of rehab was occupational therapy OT.  When you hear the word occupational, you tend to think job related but that’s not really what it is.  OT actually is focused on the things that occupy your time all day from waking up to going to bed.  Paula Miller, my occupational therapist, started by going step by step through my daily routine in minute detail from showering and brushing my teeth to driving to work to cooking dinner and getting ready for bed.

This is the therapy where we worked very hard on driving skills.  During my first few sessions, I failed miserably on the simulator.  My reaction time was at least a half a second slow which needed work.  I also had judgment issues resulting in running over cars, curbs and people which are not particularly acceptable in the real world.

What I enjoyed the most in OT was working with power tools.  Before the injury, I did woodworking as a hobby and wanted to be able to do that again.  They had to make sure it would be safe for me to operate machinery capable of severing limbs.  My wife Bonnie was all for that idea too.

My hope was to resume the hobby of woodworking in my spare time but when it became apparent I would not be able to continue my career as a computer engineer, it became a far more important to become proficient at building things.  Since completing rehab, I worked very hard to develop my carpentry and woodworking skills and have completed many projects for our home and several other people.  Some projects were a little over ambitious and I needed my son Bryan to help but most have been within my capabilities.  I now help him figure out how to do his projects.  Building and woodworking are actually very good exercise for a damaged brain. 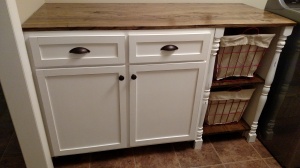 The rehab process may seem daunting and feels like it takes forever but in the end, it will prove extremely valuable.  As you move forward, you will feel like you belong and are genuinely providing a contribution.  Hang in there and give it all you have.